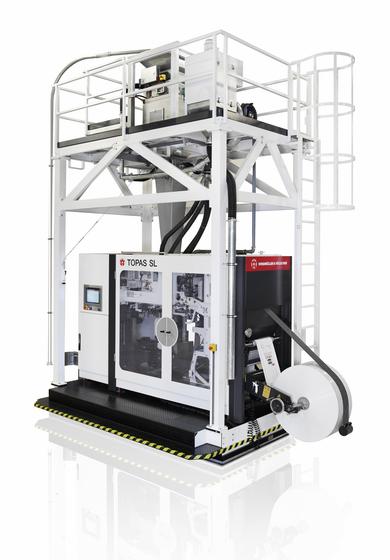 TOPAS SL is the youngest model of Windmöller & Hölscher's comprehensive machinery program for the commercially efficient bagging of free flowing bulk solids. The high-output TOPAS SL was launched in early summer last year and represents the fourth generation FFS system of the exceptionally successful TOPAS range. At interpack, the machine will make its debut at an international trade fair. Thanks to its high output of more than 2,600 sacks per hour – which makes it the currently fastest line of its kind in the world – and to its exceptional operational efficiency, the TOPAS SL has met with international success. At this year's interpack it will be demonstrated in operation at the W&H stand in hall 15.

With hundreds of installations worldwide, the TOPAS has become the world's best-selling FFS machine for free flowing bulk solids and therefore written bagging history. Users and operators value its performance, reliability, accuracy and easy handling. There is hardly a segment in the bulk solids spectrum for which the TOPAS has not set the standards for modern and efficient bagging, while its universal applicability has continued to impress.

The TOPAS SL continues its success story with the positive attributes that have brought this concept of FFS bagging to the forefront, including the high standard of engineering quality, the variations of the model and the proven experience of W&H, and most importantly, the wealth of innovation that opens new opportunities for bagging operations. Other highlights of the TOPAS SL include easier operation, 20% increased output and an attractive price/performance ratio.

The TOPAS SL differentiates itself conceptually and in many details from its predecessor, starting with the significantly improved accessibility offered through the open frame structure and the large, transparent safety doors. Additionally, the newly designed operator touch screen is as easy and intuitive to use as a smart phone. The intensified top and bottom seam cooling gives much shorter processing cycles, while at the same time maintaining consistently high strength of the seams.

Another modern element is the extent of electronic support systems, of which the new data messaging system is but one example. Beyond text instructions, it offers graphic representations and videos on the screen to help operators and service personnel locate and resolve problems on site.

A wide size range, universal sealing technology, diverse dosing methods, highly accurate weighing technology and extensive additional options leave nothing to wish for. TOPAS SL's compact construction is perfect for both mobile and stationary bagging. Rail and wheel platforms allow efficient bagging of a variety of products or batches, as are seen on the agendas in logistics terminals. Differing bulk density, particle size and flow properties of products to be bagged are taken care of by tailored product feeding and weighing systems as well as by the specially adapted design of the drop chute and the filling hopper.

Since its launch in early June 2013, many optional extras have been added to the TOPAS SL. The machine on show at interpack features the special equipment that allows for almost absolutely dust-free bagging of powdery bulk goods. With comparable equipment for PVC applications embodied in the predecessor model, W&H already obtained a leading market position in this sector. Another highlight of the TOPAS SL showcased in Düsseldorf is the completely redesigned net weigher, which excels with large service openings and a rounded enclosure, making cleaning and maintenance child's play. Special versions of this weigher include equipment for the bagging of powdery products as well as a washable model.