New Marking Solutions for All Industries 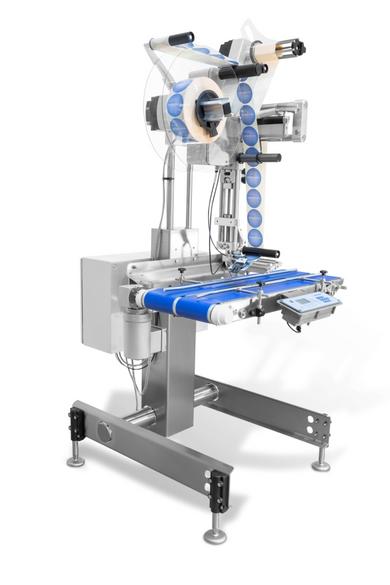 New Marking Solutions for All Industries

At Interpack, which will be held from 8 to 14 May 2014 in Düsseldorf, MULTIVAC Marking & Inspection will be represented in two exhibition halls. In Hall 5, Stand E23, the marking specialist will be presenting a new generation of label dispensers which feature very high labelling precision and labelling speed. The label dispensers are used in the new conveyor belt labellers, which now include not only high-end devices but also cost-effective entry-level models for simple labelling tasks. In Hall 17, Stand A51, MULTIVAC Marking & Inspection will be showing its folding carton labeller for the life science and healthcare industry.

The new label dispensers of MULTIVAC Marking & Inspection work with servo technology, which allows them to achieve not only very high performance but also maximum labelling precision. Through their integrated control and drive technology, they have an especially space-saving design and can be optimally used in existing transport systems as well as filling and packaging machines. Various communication interfaces ensure integration with a variety of control environments. The marking specialist initially installed the new generation of dispensers in its conveyor belt labellers, which can be seen at the trade fair in various versions – as a stand-alone device as well as integrated into packaging lines. In addition to the series L 310, which includes the proven high-end models, MULTIVAC Marking & Inspection is bringing the new series Baseline L 300 to the market at Interpack 2014. It includes cost-effective entry-level models for simple labelling tasks in proven MULTIVAC quality.

In the area of ​​labelling and printing on thermoforming packaging machines, MULTIVAC Marking & Inspection is showing a solution with two MR625 OP cross web labellers, which can be built extremely compact thanks to a special safety control for distance monitoring. “The use of two cross web labellers allows uninterrupted operation. For large cut-offs, it is also possible for the two labellers to share a die format, allowing very high performance to be achieved,” explains Volker Gerloff, CEO of MULTIVAC Marking & Inspection. A MR293 TT direct web printer ensures that the production data is printed directly on the film in a manner that is tamperproof.

From its comprehensive portfolio of inspection systems, MULTIVAC Marking & Inspection is showing a checkweigher with MR822 metal detector and automatic recipe download from the MULTIVAC traysealer as well as an MR812 X-ray inspection system. For label and print control, the marking systems are equipped with different optical inspection systems.

In Hall 17, MULTIVAC Marking & Inspection is presenting its folding carton labeller, which allows the user to implement the requirements of EU Directive 2011/62/EU in the life science and healthcare industry. Starting in 2016, medicines that are sold within the EU must have both an individual identifying feature (“unique identifier”) and a tamper-evident feature (“tamper verification feature”) applied by the manufacturers on the outer casings of packs. With the folding carton labeller from MULTIVAC Marking & Inspection, the flaps of folding cartons for medications can be sealed in a tamperproof manner using sealing labels; in addition, the tabs can be printed with serial bar codes, which are currently being used in more and more countries around the world for authenticity checking and traceability marking.

The folding carton labeller features a GMP-compliant design and a pharmaceutically-compliant enclosure. It can be combined with various printing and control systems. Reject packs are removed and the product ejection is counterchecked. A track-and-trace connection to higher-level databases of the drug manufacturers is also possible. The folding carton labeller can be easily retrofitted into existing lines without changing the packaging machine. The qualification of the independently operating additional system is as simple as the validation that is needed only for this additional process step.